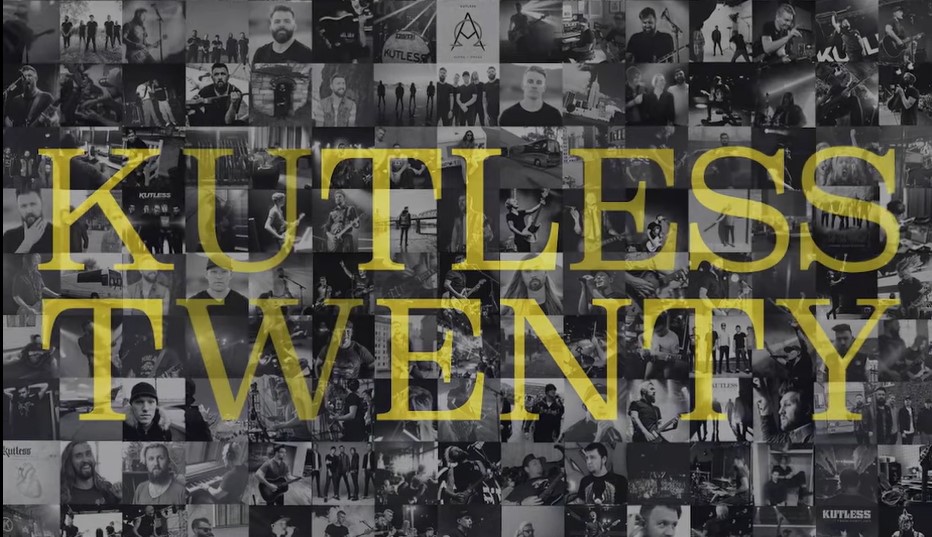 FOR RELEASE JULY 20, 2022 — Kutless has released Twenty, an EP featuring reimagined, re-recorded versions of three hit songs from the band’s self-titled debut album Kutless. Kutless is celebrating the album’s 20th anniversary with a musical expression of gratitude for 20 years of ministry.

The Twenty EP features fresh takes on “Your Touch,” “Run” and “Tonight,” all songs that put Kutless on the map two decades ago as a rock band to watch.

“We’ve been through a lot over the last 20 years,” Kutless lead singer and songwriter Jon Micah Sumrall shares. “We’ve grown, we’ve learned, there have been hard times, there have been fun times. Every step of the way as we revisited these songs, it brought back a lot of memories.”

“Our fans want two things from us,” guitarist and songwriter James Mead adds. “One, they want us to treat their beloved songs with respect. And two, they want to be surprised in a pleasant way. It was exciting to face that challenge, to give these songs a long enough leash that we could change parts, add new parts and really focus on the fact that we’ve grown over the past 20 years.”

The new renditions were recorded with Josiah Prince (Disciple, Fireflight) and mixed by Nick “Rad” Radovanovic (Skillet, TobyMac). With that outstanding studio team behind them, Kutless was equipped to reinvent some of their most career-defining songs. “I was 21 years old when that first record came out, and James was 19,” Jon Micah explains. “Now we have all this experience. We’re much better musicians, much more seasoned. We wanted to bring that experience and skill to these new renditions.”

Although cast in new explosive, polished musical housing, these three songs still do what Kutless has always done best: speak to the timeless goodness of God. “Your Touch” offers up a cry of a heart in the dark, moving in faith to invite God in. “Run” is sung from God’s perspective, tenderly inviting us back to His love when we’re blindly running towards the things that will never satisfy.

“Tonight” has been something of a creed for Kutless, a mission statement birthed in the days when few could believe that rock and worship could coexist. “When Kutless first came out in 2002, rock music was still treated like it was bad,” James recalls. “This song was for any person who may not understand what we’re doing and why we’re doing it. ‘Tonight’ shows them what’s happening. We’re giving glory to God, using our gifts and our passion to bring people to Him and to tell them about Jesus Christ.”

Looking back at the path songs like “Tonight” paved is proof of Kutless’s impact not only on their listeners, but on the genre as a whole. Kutless was one of the earliest bands to offer accessible rock with faith-first lyrics— a format that would incite an entire cohort of bands to follow.

With these freshly recorded versions of their songs, a whole new generation has the chance to be inspired by Kutless’s music. In fact, that inspiration has already begun through a very special guest feature in the gang vocals on “Your Touch:” Jon Micah’s 17-year-old aspiring musician son, Caleb.

“On ‘Your Touch’ there was a part where I knew we would need to be stacking vocals,” Jon Micah explains. “So I was like ‘hey, you want to sing on this song?’ He was just so stoked that he got to be a part of it. It’s his first professional release.”

The Twenty EP is truly poised as the perfect bridge between where Kutless has been and where they’re headed, as they continue to work on fresh new music in the studio. They’ll also be launching a podcast, featuring stories from their many years on the road. Some of those stories are already teased on the 20 album artwork, which is a collage of photos from notable moments in the band’s past.

“It’s been a privilege to be a part of this, to let God lead us. To look back on all these memories is really special to me,” James concludes.

You can find the EP at https://kutless.ffm.to/twenty. Keep up with Kutless for more news on music to come at www.kutless.com, or by following them on Facebook, Instagram, Spotify and Apple Music.