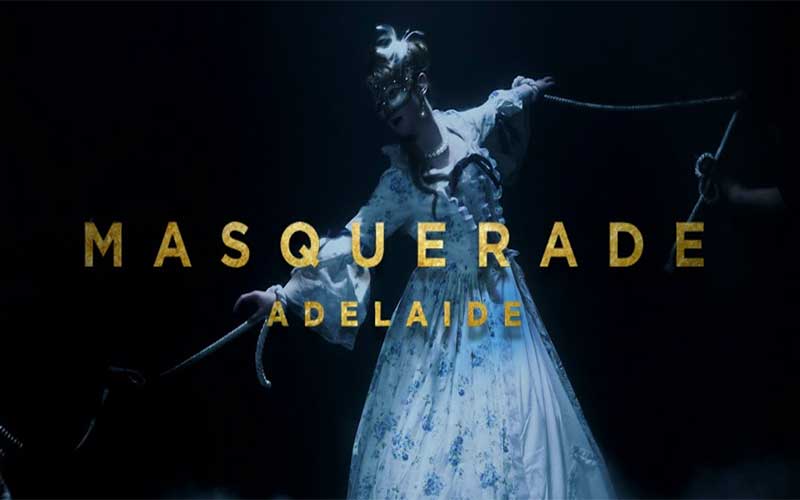 FOR IMMEDIATE RELEASE — Adelaide has collaborated with fellow artists and filmmakers Jared and Vanessa Bayless to create a new music video for their song “Masquerade” from 2019’s Strong and Brave. You can watch the music video now.

The music video plays like a short film, a sweeping cinematic take on the masks we hide behind— and how we might be set free from them. “The Masquerade itself represents the everyday people going about their everyday lives. While it applies to everyone, it was primarily written to the church,” Adelaide vocalist Laura Respondek explains. “I’ve been awakened to the realization that many, if not most, self-proclaiming Christians in America don’t read their Bibles, and in turn don’t really know what they believe. Do we really have any business telling people who God is if we’re making no effort to know Him? ‘Masquerade’ is a wakeup call to the church.”

With such a naturally visual theme, Laura wanted to be sure that the music video did “Masquerade” justice. So she approached Bayless, who self-produced the Grizzly Award-winning music video for “Ready. Aim.”

“This was my favorite Adelaide song before they asked us, so I was excited when they picked this song for us to do,” Jared Bayless shares. “I think what is inspiring is you can hear the cry of desperation in Laura’s lyrics and voice. Sometimes that same cry of accepted solitude from someone else rallies you, makes you want to speak up and let them know that they aren’t alone. This is a song that has a clear heartbeat and message of hope, even inside of despair.”

“The primary moment I wanted people to see visualized was the dancers oblivious to the hourglass counting down to the moment of judgement, when all of our ‘masks’ or facades will fall and our true selves will remain unhidden before a righteous, good, yet just, God,” Laura says of the song’s imagery.

Jared and Vanessa Bayless and Hayley Laban took that seed of any idea and ran with it: “We sat down and storyboarded the whole song out, even asked if we could do a whole story intro before the song ever started, to really help tell the story even better. We wanted to paint this beautifully dark portrayal of real life and what is going on all around us, even if we can’t see it.”

The result is a monumental visual epic that raises the bar for music videos in 2021, an era where they’re often an afterthought. For the Adelaide and Bayless teams, this became an opportunity to build and expand on the song’s inherent themes.

“Even I had to watch the video 4-5 times to catch all of the details!” Laura admits. “We understand not everyone will see the depth of the spiritual undertones, but they are there for those that do. The ultimate goal is to challenge believers to remember that this life is but a vapor. We can’t lose sight of our purpose and God’s call on our lives. If you’re wearing a mask, take it off. If you’re dancing with demons, it’s time to fight back. If you’re chasing thrones, you’ll never be content or fulfilled by the world. In Christ you will find peace, joy and comfort, now and forever.”

That message held enough weight that the team wanted to execute the video with creative excellence. The whole Bayless team was on deck, including Jared and Vanessa Bayless as visionaries and directors, bassist Hayley Laban assisting with art direction and drummer Zach Lopez-Smith working as a second shooter. Jared says that this felt like an opportunity for Bayless to realize their calling in a whole new way: “We realized that we weren’t just a band. We were content creators who could write you a song, produce and record it, shoot you a video or do your band photos. We realized we are all friends who love to serve other bands or companies, using our unique talents to do so.”

“It was surreal to share this vision together and watch them bring it to life,” Laura shares as she looks back on the video’s production. “To see the hard work of the dancing involved on the part of the ballroom dancers and ‘dancing demons’ was so cool. I was looking around a room of people all playing a vital role in making this vision a reality, and heading it all up was Bayless, who had spent so much time planning, creating and then filming. To see a band serve the way they served was very humbling.”

The collaboration on “Masquerade” is likely only the beginning for both bands, musically and visually. Bayless remains open to creating future videos in the past. Adelaide is continuing to create songs with this same urgent, earnest message of truth. For Laura, that message is summed up in a line from the second verse: “Awake, don’t break. I don’t want to see you fall into no escape.”

It’s an urgency Bayless echoes. “I think Laura said it best,” Jared affirms. “Life is short. Live life with a sense of urgency. We are all not promised anything, not even that breath you just took. There is still hope to be had, even in despair. You aren’t alone, even when it feels like it sometimes. There are many others who are joining in the fight and have broken free from the ropes that bind us all sometimes. You can too.”